The 8th of March in Italy is Festa della Donna, International Women Day. Learn how to celebrate it and what we gift yellow flowers to women on this day.

If you find yourself in Italy on the 8th of March, you are sure to notice that, on this day, the country seems to fill with bouquets of yellow puffy flowers, mimosa flowers to be precise!

Mimosa flowers are traditional in Italy on the 8th of March and their history is linked to that of International Women’s Day, Festa della Donna, in Italian, celebrated on this day.

Mimosa flowers are the traditional flowers to celebrate International Women’s Day, are are usually gifted to women on this day: by men but especially by other women.

This is how the tradition came to be.

What is Festa della Donna in Italy

Festa della Donna is the Italian name for International Women’s Day and is a big festivity in Italy, even if it wasn’t born here.

International Women’s Day has been observed in many countries around the world since the early 1900’s,  and its official description is “a collective day of global celebration and a call for gender parity”.

As far as I know, there is no specific organization behind it but rather it is an occasion to raise awareness about the gender issue and the fact that, despite all our progress, we are still very far from real parity.

In case you are wondering if it is true, that parity is still a faraway goal, I thought it would be useful to share with you a piece of data I found.

‘The World Economic Forum predicted in 2014 that it would take until 2095 to achieve global gender parity. Then one year later in 2020, they estimated that a slowdown in the already glacial pace of progress meant the “overall gender gap would close in 99.5 years, on average“.

Why we gift yellow flowers on the 8th of March in Italy?

The Italian tradition of giving mimosa flowers on the 8th of March started in 1946.

That, year Rita Montagnana and Teresa Mattei, two activists fighting for equality of women, came up with the idea of marking the UN international women day (8th of March) with a symbolic gesture and started offering branches of mimosa to other women, as a gift and a sign of mutual respect and support.

There are many reasons why la mimosa was chosen to mark this day.

Mimosa is one of the few plants in full bloom in the winter, so it’s a flower instinctively associated with this time of the year.

If you are in Italy from mid-February to March and beyond, you will find tall mimosa trees coming back to life with glorious puffy mimosa flowers and filling the air with their delicate and distinctive perfume.

The second reason, more symbolic, is that mimosa is a spontaneous plant, one that naturally grows and flourishes in Italy, exactly what the women movement was working to achieve for the women of the world: making the world a place where women can also prosper, without having to fight for it.

The third reason is that the mimosa looks fragile, with its little yellow puffs, but is actually a  very strong plant, able to resist adverse conditions.

Once again a trait that many would say is typical of women too.

How to gift mimosa flower on Festa della Donna

If you want to take part in the giving tradition, you will have no problems finding mimosa flowers.

On the 8th of March in Italy, bouquets of mimosa flowers appear everywhere, shops and street vendors all offering you cheap or not so cheap bouquet for purchase pretty much at very corner.

If you have a woman in your life you want to gift mimosa too, all you need to go it get one of them: no special card or greeting needed.

However, I fell like giving you a little bit of a warning!

While the intention and the story of the mimosa flower is an empowering one, not all women love it.

Some women feel that having a special day to celebrate them is part of the problem, not of the solution, and that giving flowers, especially men to women, is a way to re-affirm stereotypical gender roles in society and find it patronizing and plain annoying.

So basically, you want to know your audience and make sure your normal behavior is empowering for women or no flower will make up for it, on this day or any other (ok, lecture over!).

I hope you found this quick guide to understanding why mimosa flowers are given on the 8th of March in Italy and gave you some context to this tradition and International Women’s day. 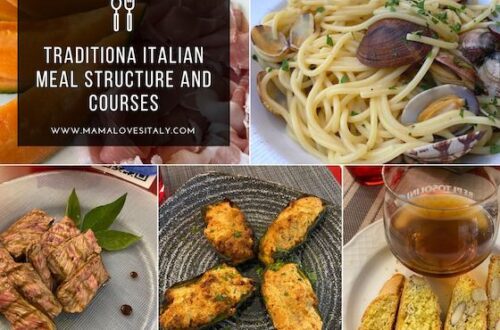 Traditional Italian meal structure and courses: all you need to know + how to recreate it at home

100 Italian names for girls you will love