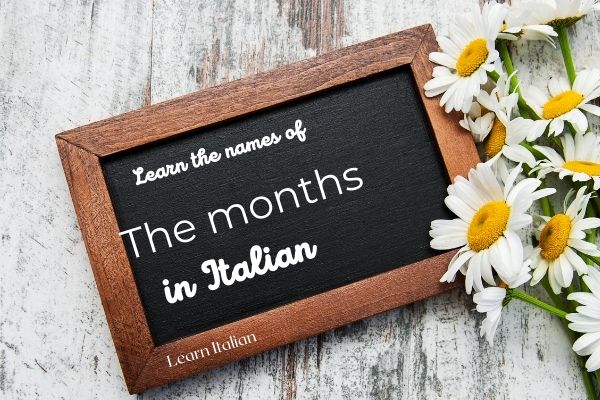 Learn the names of the months in Italian with this guide to their names, spelling, pronunciation and a fun Italian rhyme to remember their length!

In a previous lesson, we have learnt the names of the seasons in Italian.

Today, we add to that by looking at the names of the months.

The Italian names of the months are close in spelling and pronunciation to those in English.

Both languages use words with Latin roots and, especially in writing, it is easy to see the similarities.

The thing that can sometimes be confusing, in Italian, is the use of prepositions and articles with the names of the months.

In this lesson, we try to clarify this use and we will give clear examples of the most common espressions.

The names of the months in Italian

Italian months of the year rhyme

Italian children learn the length of each month with a rhyme, which is also helpful when trying to recall the pronunciation of some of them.

with April, June and September

With twenty-eight, there is only one

All the others have thirty-one!

Where the names of the months in Italian come from

The names of the months in Italian, just like in English, come from the names of ancient Roman Gods or their chronological position in the list from first to last.

Let’s look at them one by one.

The name Gennaio / January comes from Ianuarius, the Latin name of the first month of the year, named after the ancient God Janus.

Janus was the ancient Roman God overlooking the moment of sunrise and sunset and, as such, he is a deity associated with transition and change.

He was represented as a male figure with two faces, looking forward and backward at the same time, and he was the divinity of doors and gates, as areas of transition.

This association with change made him the perfect deity to name the first month of the year when the old leaves space to the new.

In Italian, Gennaio is a masculine, singular name. It takes no definite article and uses the preposition a and in/di

The name Febbraio seems to come from the Latin name of the second month of the year, Februarius and the verb ‘februo’= to purify.

During this month, the ancient Romand marked the pagan festivity of Lupercalia, devoted to purification and cleansing.

In Italian, Febbraio is a masculine word, singular. It takes the prepositions a and in

The name ‘Marzo’ is associated with God Mars, one of the most powerful and famous Gods of ancient Rome, overlooking over war and, in origin, agriculture.

In Italian, Marzo is masculine, singular and takes the preposition a (occasionally also: in).

There is no agreement among linguists about the origin of the name April as several explanations seem possible.

Some say the name comes from the Etruscan word Apro, associated with the Goddess Aphrodite/Venus.

This interpretation seems to be supported by the fact that, in ancient Roman times, April was indeed sacred to Venus, the divine ancestor of Rome’s founder Romulus, who founded Rome on the 21st of this month.

According to other interpretations, the word Aprile may come from the word ‘apertus’ (=open), to signify the opening of blossoms during this spring month.

In Italian, April is masculine and singular and takes the prepositions in and a/ad.

Quest’anno la Pasqua cade in Aprile = this year, Easter is in April

Andiamo in Sicilia ad Aprile = we go to Sicily in April

Sayings associated with the month of April:

Learn here: what Italy is like in the month of April

The Italian month Maggio takes its name from the Latin month Maius, devoted to the Goddess Maia.

Maia was the mother of Mercury and goddess of abundance and fertility, worshipped especially in this onth so important in the agricultural calendar.

In Italian, Maggio is masculine and singular and takes the prepositions in and a (occasionally: di)

Mi sono sposata a Maggio = I got married in May

Era de’ Maggio, e te cadeano n’sino (Neapolitan song): it was May and (cherries) fell on your lap.

Ninetta mia crepare di Maggio, ci vuole tanto troppo coraggio (song by De Andre’: listen to it here): My Ninetta, it takes a lot, too much courage to die in May.

Learn here >>> what it is like to visit Italy in May

Giugno takes its name from the goddess Juno, the powerful Roman deity overlooking birth and, more in general, symbolizing the feminine elements of the universe.

In Italian, Giugno is singular and masculine, and takes the prepositions a, in and di.

The month of July, Giugno in Italian, takes the place not from a God as such but from a famous Rome who was elevated to the rank of a deity: Julius Caesar.

Before his time, the month was called ‘quintilis’, meaning the fifth (the Roman calendar started later than the solar one we use now).

In Italian, Luglio is masculine and singular and takes the prepositions a, in and di.

Ci vediamo a Luglio = I’ll see you in July

The word ‘Augustus’ in Latin meant ‘auspicius’ and was used as a title, an adjective and a name.

It is most famously associated with Emperor Augustus, the first Roman Emperor, who took this honorary title in 27BC.

In ancient times, this month saw the celebrations of Augustalia, important festivities that are, in some form, still celebrated today! learn all about it in our article about Ferragosto, the festivity falling on the 15th of this month.

In Italian, Agosto is masculine and singular and takes the prepositions a/ad, in and di/d’

In Agosto, sono tutti in ferie = in August, they are all off work

Settembre was the seventh month of the ancient Roman calendar and takes its name from the Latin number septem (sette, in Italian = seven).

It is a masculine, singular word and takes the prepositions a, in

In Settembre, in molte parti d’italia puoi ancora fare in bagno = in September, you can still swim in several parts of Italy.

October was the eighth month of the ancient Roman calendar and takes its name from the Roman numeral octo = eight.

In Italian, Ottobre is masculine, singular and takes the prepositions a, in, di.

November was the ninth month of the ancient Roman calendar and takes its name from the Roman numeral novem = nine.

The word, in Italian, is masculine and singular and wants the prepositions in, a, di.

E’ nata a November: she was born in November

December was the tenth month of the ancient Roman calendar and takes its name from the Roman numeral decem = dieci (this is the same etymology as ‘decimal’ or ‘decade’).

The word Dicembre is masculine and singular and takes the prepositions a, in.

Se vieni in Dicembre, festeggiamo Natale insieme: if you come in December, we can celebrate Christmas tofether

A Dicembre fa buio presto: in December, it gets dark early

What preposition to use with the Italian names of the month

As you have seen from the examples above, the most common prepositions used in Italian with months are a and in.

The two are pretty much interchangeable and the difference in use to subtle, it is often lost even between native speakers. There are also local differences that may explain the prevalence of the use of one over the other.

If in doubt, ‘a’ is usually the safest as widely used and understood.

I hope you enjoyed this quick lesson and it helped you learn the names of the months in Italian. Buono studio! 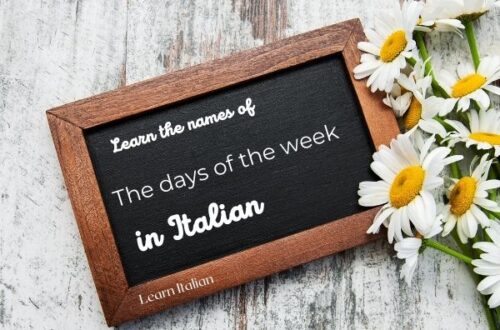 The days of the week in Italian (with examples) 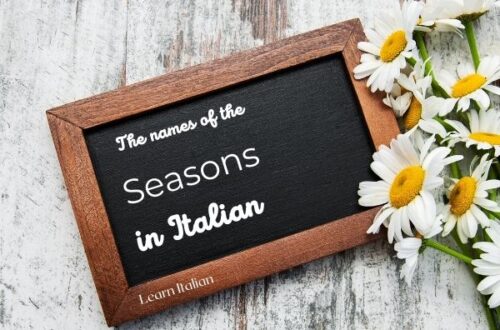 The seasons in Italian: learn easily their names, pronunciation and spelling 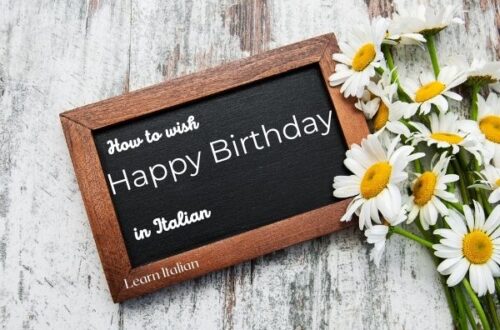 How to wish someone a happy birthday in Italian